Your air-mail of 12 Feb. came in this morning so I will answer it immediately. Yes, the promotion comes in very handy. Mostly because it will be gratifying to be able to step in as a Captain in the next war instead of having to fight my way up from the ranks again. Methinks that the Army may be the safest place to be in the next war. All that is, of course, pure cynicism. We should have our program rolling long before a definite break between the big powers becomes inevitable.

I am sorry to report that I have no money that I can invest in anything. All I have is brains, ideas and the guidance that you have given me. Jack is the boy to look to for finance. By the way, Jack has not written to me since my return from Pasadena. I wrote to him shortly after I came back to San Francisco. This leaves me under the impression at the moment, though I hope I am wrong, that all the plans we made for incorporation, etc. while I was down there have either been thrown over-board for something else or he is simply dragging his anchor. It is possible that he has been away on his project. I have no way of knowing.

I believe that you are right concerning my first loan having been canceled. I have sent Karl a full report on my contributions. You will know more about my references to copies of the Book of Thoth that may have been unsold when you read my report. My primary interest is to have a fund here with which to start operations of the Order. In this connection I am sending along a sample of what we will have to combat from AMORC. These three advertisements were taken from two issues of one of the cheaper pulp magazines. Number (1) was taken from one issue and numbers (2 A) and (2 B) from another. Number (1) is the type of advertising they have been doing or years. Numbers (2 a) and (2 b) appear to be new departures — you will note the “atomic-era” appeal of (1 a). They also illustrate another point. It is poor finance to take money out of a business before it becomes a paying proposition. Rightly or wrongly Jack seems to think that he could have done great things had he not been called upon to contribute so much to Grand Lodge. Maybe yes and maybe no in his case. The principle is, however, a sound one. I have told Karl that I will try to send him $10 every month, and that I intend to use the money I receive on the sale of Books of Thoth for a lodge fund to promote the O.T.O. here in San Francisco. Now I could send the entire amount of these sales to him — and continue my $10 contribution. Or I can take a chance on forming a Lodge and hope to send a substantial contribution each month from a number of members. The first method is a temporary expedient and as soon as that money is gone we will be scraping again. The second method is sound business and the only way to build the O.T.O. into any kind of an organization.

Along with the AMORC advertisements I am inclosing a study in robotics. I thought it good for a laugh.

I must admit that I had no idea of the size of your correspondence until I untook {sic} this little investigation. Then one and all proceeded to pull out their little files and say “This is what I wrote to A.C. and this is what he said to me”. Almost I am surprised that you don’t chuck it. But then you asked for it, didn’t you? Perhaps that is unkind — let us say that this is your Will and that you are stuck with it, including all of the asinine things that go with it. But cheer up, we are bound to come out on top!

I must be off now. I have a number of posters advertising the Book of Thoth that I am going to take around to various book stores here in San Francisco. Wish me luck.

Love is the law, love under will 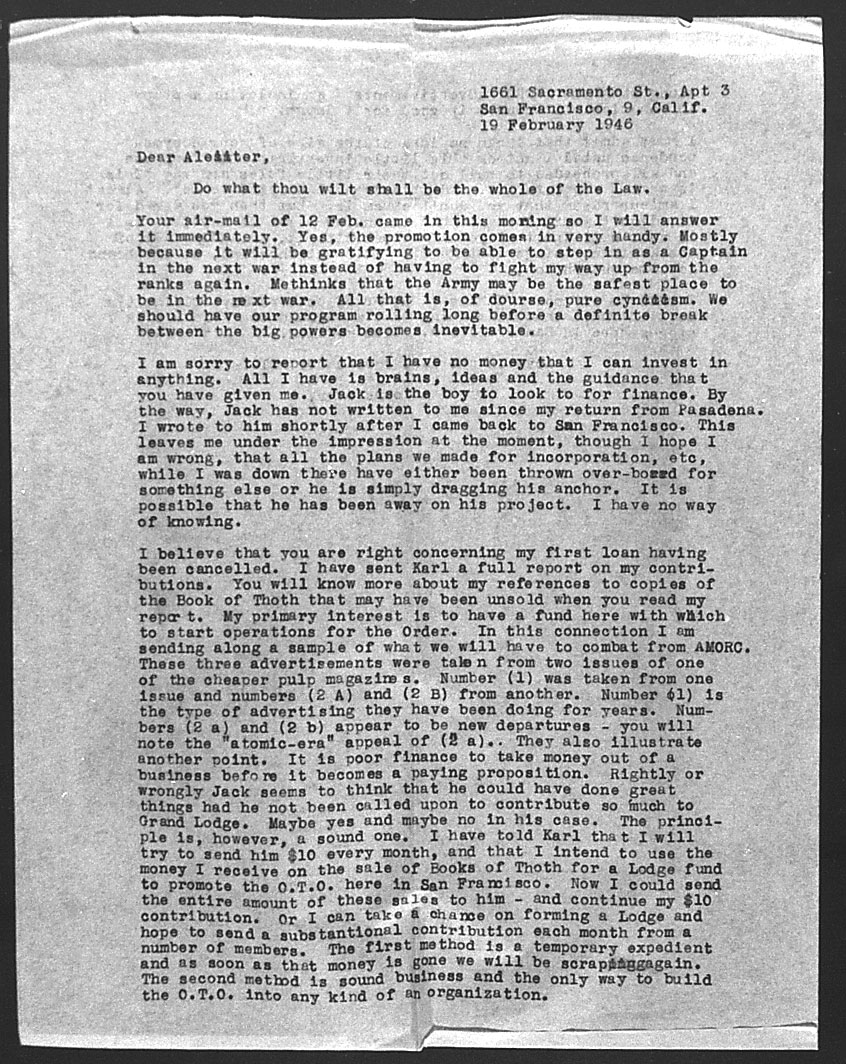 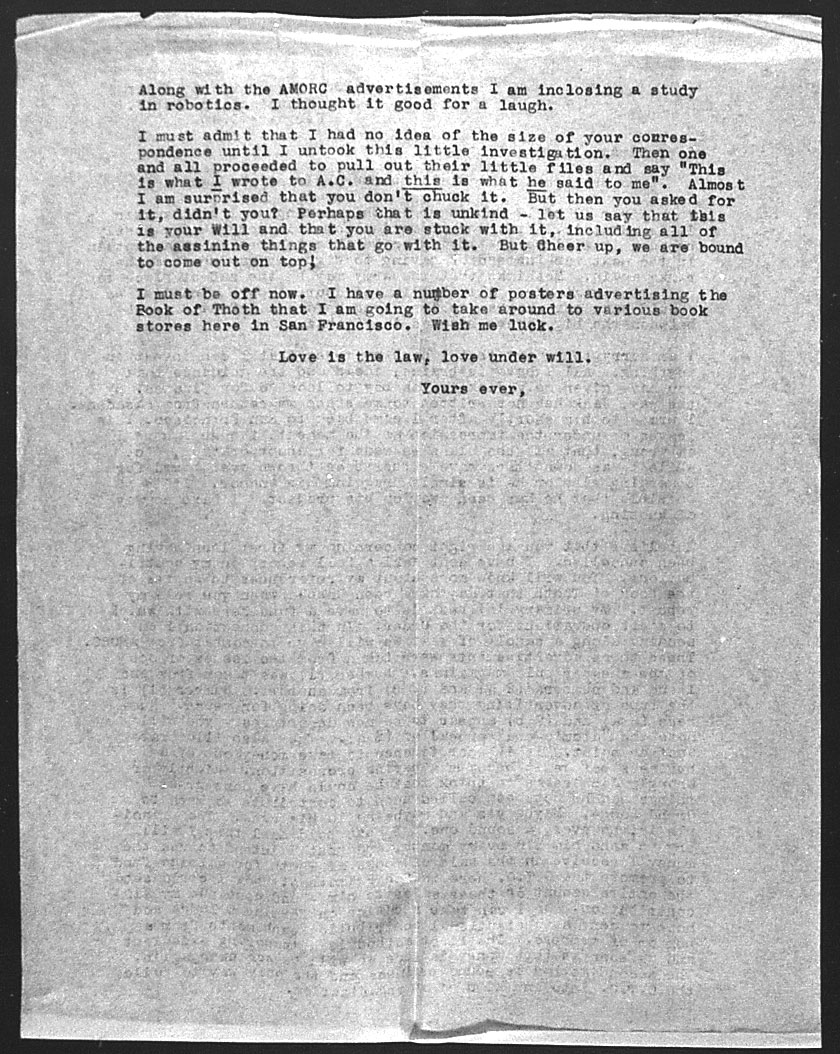