This will let you know that I have yet another change of address and also that I probably will not be seeing you for some time. Unless you come to the States within a year or so, of course. I do not expect to be back there until then myself. Pulling me out of Germany at this time was sad indeed — considering that I was about the only man in the company who could speak German well enough to get around. Actually I didn’t mind that so much as I did the anticipated “Battle of Prague”. I think I mentioned taking liberty run convoys into Pilsen — while there I met certain delightful young things who had come over into the American zone to visit Pilson for purposes of dancing — it being impossible to dance in Prague for some reason. Now I read in the Stars & Stripes that the Russians are evacuating that city — so here I am far back in la belle France wondering what to do with these addresses in my little black book! We will now recite three verses of “The City of Dreadful Night”.

There doesn’t seem to be much chance of playing chess around here but at my last station I was the unofficial champion of an impromptu club. I was beating all comers with regularity, anyway. I seem to be able to make a powerful offensive with a modification of that Danish gambit you demonstrated. Allowing the pawn to become well developed before administering what we call in American football “The Mousetrap”, with the bishops doubled and the knights playing merry hell with the castled king. Speaking of football — I’ve used another expression they commonly employ “the line-drive play” in this bit of verse. Somehow I seem to be stuck with that particular form. Like a cracked record grinding out the same old tune.

Trust that the “Yogi” has arrived by now. Has Frieda mentioned my having her Rabelais? if so tell her to keep her shirt on as I will sent it as soon as I have finished reading it. Don’t be surprised if there is some delay in my answering your next letter as I may not receive it for some time, 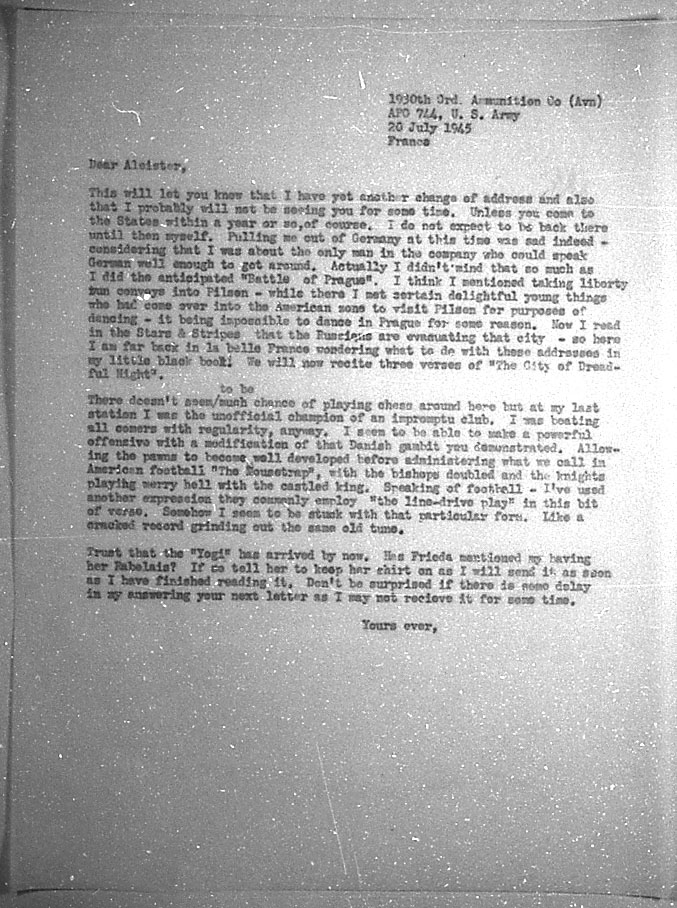