My address is as above. 1684th Ordinance Medium Maintenance Company (Aviation)(Quartermaster), Army Post Office 635, Army Air Field 373, U. S. Army. From the States it would be the same only leaving off the U. S. Army and adding instead % Postmaster, New York, N. Y.

Am sending along ye monumental (for me) Pangenetor! You can wile away the evenings building bonfires with it.

At the moment I think I will be able to come in for a three day pass — but you will know by the time you receive this whether or no by phone call.

I find it more than worth while to spend the time it takes to come and see you even for six hours on a Saturday evening but I have found my time on my hands from 2230 hours on. My billiards game is a bit rusty — maybe you have some suggestions. Have had little chance to play around here as my evenings have been well taken up reading, writing and chess. And very little chess.

Am curious as to your attitude towards such blunt and hearty phrasing as Move! Fall to! etc. Exclamation point and all. That is common parlance in the Army – especially among Sergeants who are handling men. It also reflects the attitude that an Officer must have if he is “on the ball”, i.e., “That which can’t be done we do immediately, that which is impossible will take a little longer”. The emergency measures necessary by the field expediency and ingenuity of Officers and Men in expanding an Army such as ours breeds that. Take a brace! Snap to! and many more uncouth phrases help it along. Remind me to tell you about the T.S. tickets. Which reminds me of the story of the Negro Sergeant who was dressing down his platoon and to give emphasis to his instruction said: “And when ah sez ‘Eyes right!’ — ah wants to hear them eyeballs click.”

Had a slight argument with a British Leftenant over the phone today. I kept telling him I wanted white (unleaded) gasoline and he kept telling me I wanted “Spirit of Petrol”. I almost said “Spirit of St. Louis” right back at him but restrained myself.

P.S. FORGET THE SMALL DIARY, I’LL TAKE THE LARGE ONE

Magical Record mentioned as something every — — should have. — full instructions 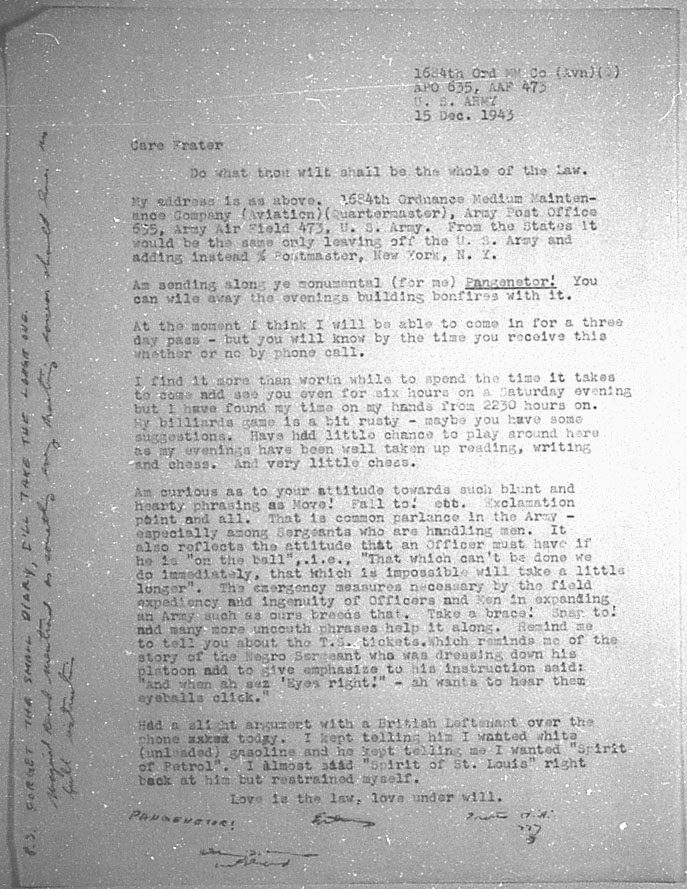