Two of your letters came in today, one dated 31 Jan & the other 7 Feb. so that I received news of your predicament on being struck at the same time with the news of its solution. Glad you like your new surroundings – just how would reach them from London should I be so lucky as to return to the UK on a visit? I sent a 1000 francs this month, which you should have received by this time, and hope to double it in the 1st of next.

Received a letter from Kenneth Grant the other day which I have answered. Do hope you can succeed in getting him out there to help you – he would be of invaluable service. In Jack’s last letter he referred hopefully to the “50 Letters”, as he called them, and wondered if there was any chance of his receiving some in the near future. I suppose he mentioned this to you as I note that you have also received the information that he has purchased the place at 1003. The candy hasn’t arrived as yet but will be expecting it – the mail service has been very poor ever since the Christmas rush.

I say, old bean, I have what I consider a most delightful book of fantasy which you might enjoy flipping through. It is a collection of caricatures by William Steig called “The Lonely Ones”. I find it extremely amusing to connect the satire with friends or acquaintances – for instance the one entitled “Very few understand my works” reminds me of Jack, “Whoever wants the answer must come to me” reminds me of you as I once thought of you, “I am at one with the universe” reminds me to take a second look at myself, and “Meditation will reveal all secrets” reminds me of Germer, for some reason. Then we have all known people like those captioned “People are no damn good!”, “Mother loved me but she died”, and the out-of-this-world expression that says “I can’t express it”. I think that you will find it amusing so will bundle it with a companion book – potboiler by the same pen, unfortunately – and try to get it off tomorrow. 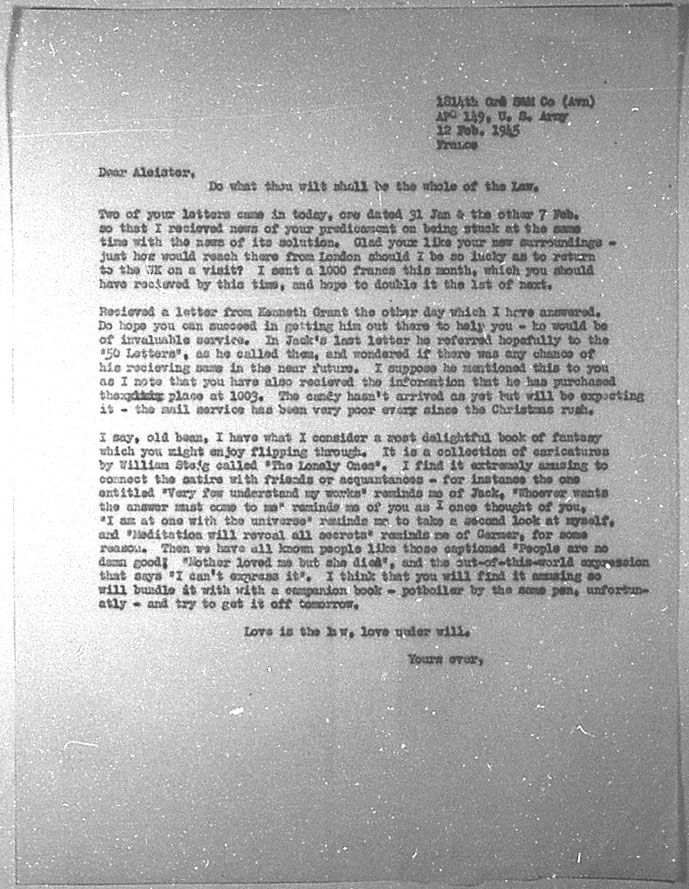