I was very pleased to have your letter of January 4th, and most interested in its contents. With regard to your poetry, I am very favourably impressed. You possess that vigour and virility which is absent from practically all modern verse. The presence of these qualities in my own work is perhaps the principal cause of the fear and hatred with which I am everywhere regarded. I hope these remarks will encourage you to persevere. I have one criticism to make, which if you take in the proper spirit, should be of considerable use to you, especially as you are evidently still quite a young man; that is, that you can improve your mastery of the language and put a somewhat higher polish on your work. This is usually the fruit of experience; if you keep a poem by you for a few months and then pick it up again more or less by accident, you will see what I mean, and be in a position to add the final touches.

I was enlightened and horrified by what you say about the California crowd. What you tell me is truly abominable. The official paper — Liber C.I. on the duties and privileges of Members is absolutely specific on the subject that you mention. Note, in particular, Clauses 34 and 37 – 39. I hope you have a copy of this document. It is published in Volume III of the Equinox No. 1, pages 211 s.q.q. (what is usually called for short the Blue Equinox). I am sending a copy of the relevant paragraph in your letter to my representative in New York, with whom you should get into immediate touch.

I may say that I am extremely dissatisfied with the whole position at Pasadena. Ever since I met Smith in Vancouver I have heard practically nothing of him except sordid squabbles. Strong measures are now being taken to clean up the whole mess. You should please reflect that Smith has constantly refused to report to me what, if anything, is going on in his part of the world. Every fresh piece of information that I get is accordingly disconnected with every other piece. I cannot begin to form a mental picture of the — am I to call it a community?

So far as I can follow what you say, I cannot help thinking that the present system is certain to collapse completely. Suppose you draw a parallel between the present time and that of the Caesars. The Pax Romana made travel and commerce between all parts of the known world comparatively easy. It was necessary to unify local systems and the combination of Judaism and paganism which was subsequently called Christianity effected this, but the new magical formula of the Aeon of Osiris was not thoroughly understood; and, in fact, previous systems were bound to perish in order to make way for it. The external result was the collapse of the Roman Empire and the Dark Ages. Today we see the same conditions; steamships, railways, telegraphs, telephones, wireless, airtravel and transport have almost abolished distance. The result is that this letter will, with any luck, reach you about as quickly as it would have done in the days of sailing ships!

The corruption of mankind is due to the overwhelming of the noble by the base, of the individual (and remember that “Every man and every woman is a star”) by the herd. Mass production has almost destroyed craftsmanship; but it may quite soon become impossible for mass production to be continued at a profit. It doesn’t matter whether we consider this desirable or no; it is a question of actual possibility.

You seem to regard with apprehension the annihilation of 90% of the malignant and stupid insects which you describe. Personally, I cannot see that it matters two hoots. What we want is the establishment of a principle; in the same way, the Commander-in-Chief unhesitatingly flings men by the hundred thousand into the jaws of destruction — that his cause may triumph. I cannot see much point in pretending to be sorry about it.

I don’t know whether these remarks help you at all, even so far as the explanation of my own position goes; in fact, the question arises whether I have a position. I am the servant of those who sent forth the Book of the Law. I can really do little more than refer every enquirer to that Book.

With regard to what you say about your own practice, of course I am completely in the dark. I am very surprised to hear that anyone attempted to instruct you in any way; I certainly know of nobody who is in the least competent to do so. I do hope you will communicate at once with Mr. Karl J. Germer, 133 West 71, N.Y.C. With him you will be able to exchange letters without the lapse of such long periods of time as if you write to me. Of course, if you should be drafted to this country, it would give me the greatest pleasure to meet you, and to do everything that I can personally to help you.

I will not detain your further; to do so would be more likely to confuse you than otherwise. But kindly acknowledge this, and give me such further information as you can. 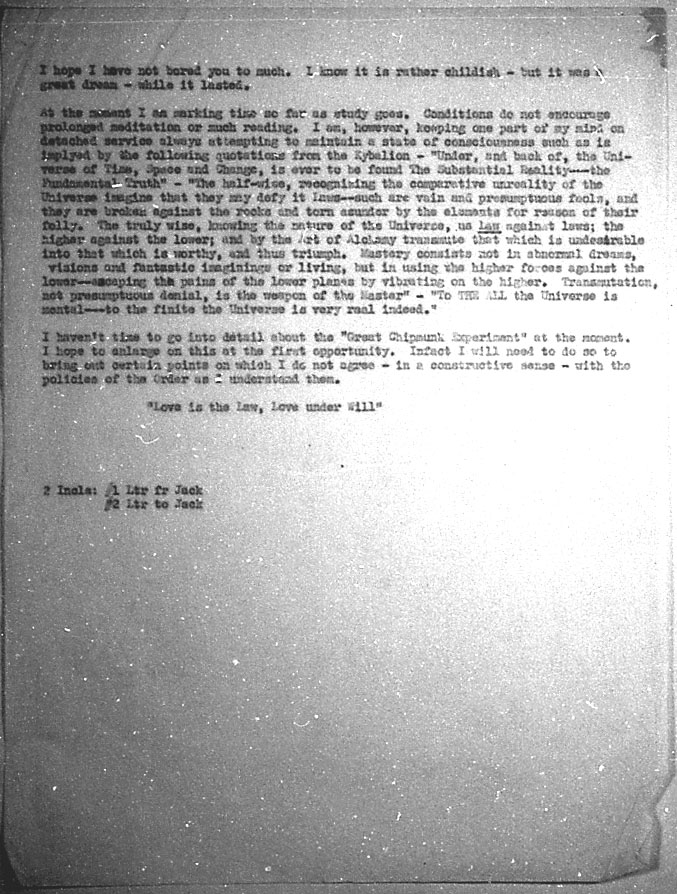