“Do what thou will shall be the whole of the law”

I hope you will pardon my delay in answering your letter. My duties are rather strenuous.

Inclosed find a copy of a letter from a member of the Group in So. Calif., also a copy of my reply. Make of it what you will. I hope that it will give you some aid in clearing up this affair. In perusing the inclosed letter you may come to the conclusion that I am bewailing a great loss in the person of the oft mentioned Claire. Such is not the case but perhaps a bit of explanation which I did not need to give Jack, as he is aware of the situation, might help. We met and fell into what is commonly known as “love” while still going to school. I was 21, she was 18. I discovered the Order first and we both took to it like duck to water. We were instinctively “at home”. It never occurred to us to doubt the personal integrity of our benefactors so obvious were the great truths they had in their possession. At first, that is. In fact we didn’t catch on for some time. But the experience was worth it. I can truthfully say, and with the courage of conviction, that had I not been in the army but had been free to choose my own locale and associates that Claire and I would not have been married. She did not want to be. I did not “want” to be. But when one is not longer the captain of one’s fate certain expedients are in order. So we made as much of a farce of it as possible. One of our witnesses, a friend of mine, was prevailed upon to loan me his DeMolay ring, which I slipped on bottoms-up so fast that the J.P. was caught off base. Somewhere in Frisco I found a bronze statuette of “The Sprit of the Flame” (as is pictured on the back of “Balthazar, the Magus”, I believe). This we kept above the fire place with long black candles on each side. We probably had some idea that we were playing with the Goetia. You know — “Ebon candles I have burned — Cabalistic circles twined — by the moons occulted light — In the waning of the night — etc.” Maybe we were. But we were happy. For awhile. But what had seemed a makeshift, temporary expedient grew into a wall of darkness. We had known from the first that to follow our Karma, or whatever, we would have to go our separate ways. But it was so easy to keep on the way we were. The rift came at the appropriate time. I had been promised my first furlough so Claire preceded me to L.A. I arrived in Los Angeles on the morning of December 7, 1941. The first thing I saw as I stepped off the bus was “Pearl Harbor Attached, all military personal are ordered to their posts”. That was a quick trip. As I was on 24 hour duty for some months thereafter Claire stayed in L.A. with the mob and found the guts to go through with what she felt was necessary. Besides, as I said before, it was much fun. Naturally I found out. To say that I was hurt rather terribly is an understatement. Even now I can hardly conceive of that blind, flaming blast of pure rage that grabbed my ego and burned it clean over a roaring tornado of primeval fury. That which I had held holy had been thrown to the dogs, and I was young enough, and Fool enough, and Child enough, to know hurt in its deepest sense. And I was man enough to control and rise above it. I was poet enough to exalt it. And perhaps I was sadist enough to even enjoy it. So which? I had advanced, I believe, one step on the road to the Great Work. No longer will emotional ties be allowed to hinder my thought processes.

Jack may have attached some importance to our divorce. The truth of the matter is, to paraphrase you, that tho we may attain a state of consciousness that considers such act as communion with one’s Adonai — and that in the light of this the scars of syphilis are as holy wafers — yet to actually contract this disease is to hinder the progress to one’s Karma. Just as jumping off a cliff would be. If she had kept herself within the order I would not have insisted — but when she started taking on the herd — I quit.

I hope I have not bored you to much. I know it is rather childish — but it was a great drama — while it lasted.

At the moment I am marking time so far as study goes. Conditions do not encourage prolonged meditation or much reading. I am, however, keeping one part of my mind on detached service always attempting to maintain a state of consciousness such as is implied by the following quotations from the Kybalion — “Under, and back of, the Universe of Time, Space, Change, is ever to be found The Substantial Reality — the Fundamental Truth” — “The half-wise, recognizing the comparative unreality of the Universe imagine that they may defy its laws — such are vain and presumptuous fools, and they are broken against the rocks and torn asunder by the elements for reason of their folly. The truly wise, knowing the nature of the Universe, use law against laws; the higher against the lower; and by the Art of Alchemy transmute that which is undesirable into that which is worthy, and thus triumph. Mastery consists not in abnormal dress, visions and fantastic imaginings or living, but in using the higher forces against the lower — escaping the pains of the lower by vibrating on the higher. Transmutation, not presumptuous denial, is the weapon of the Master” — “To THE ALL the Universe is mental — to the finite the Universe is very real indeed.”

I haven’t time to go into detail about the “Great Chipmunk Experiment” at the moment. I have to enlarge on this at the first opportunity. In fact I will need to do so to bring out certain points on which I do not agree — in a constructive sense — with the policies of the Order as I understand them.

“Love is the law, love under will” 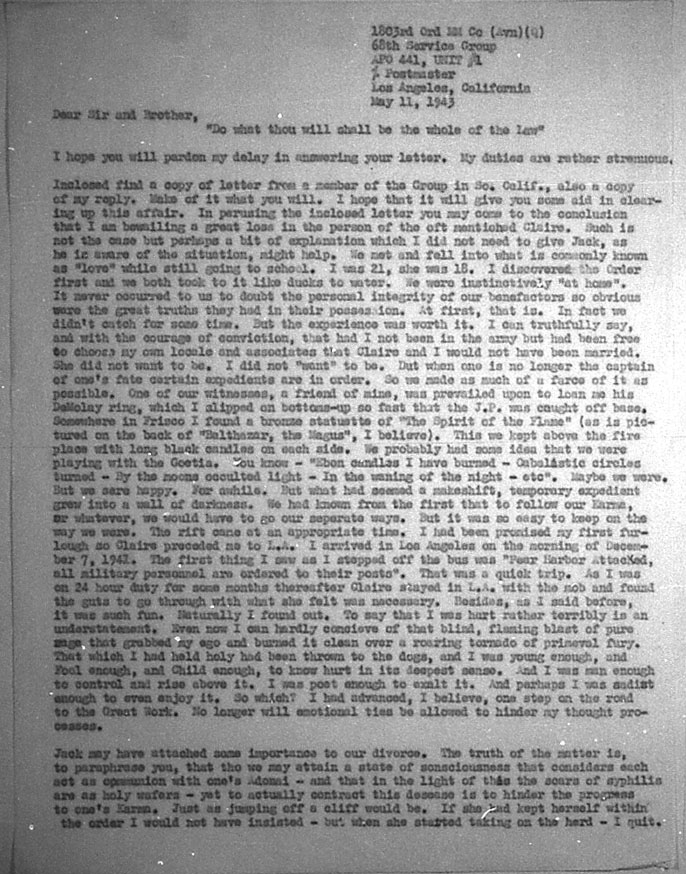 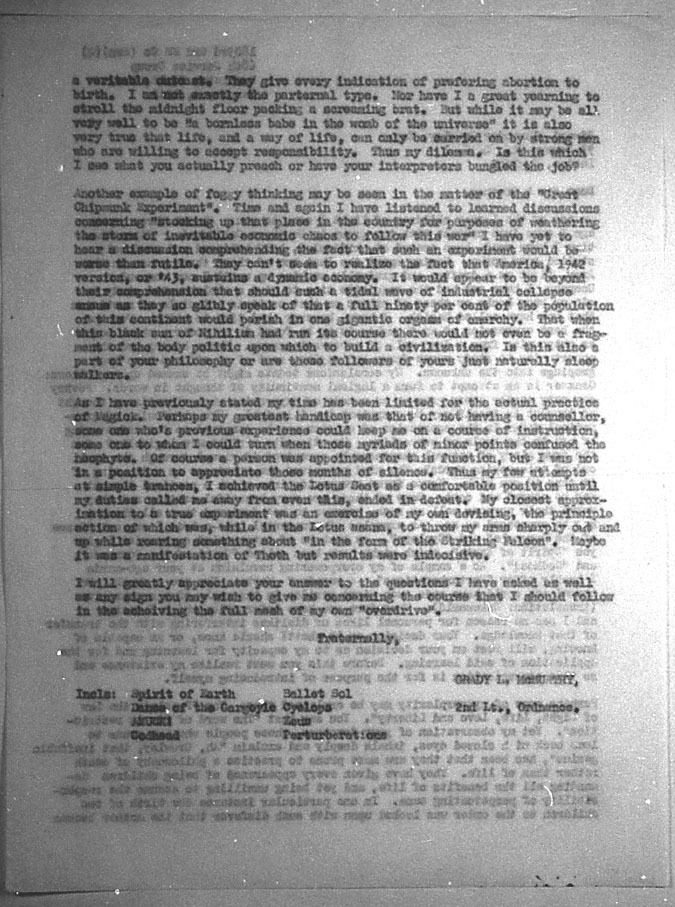